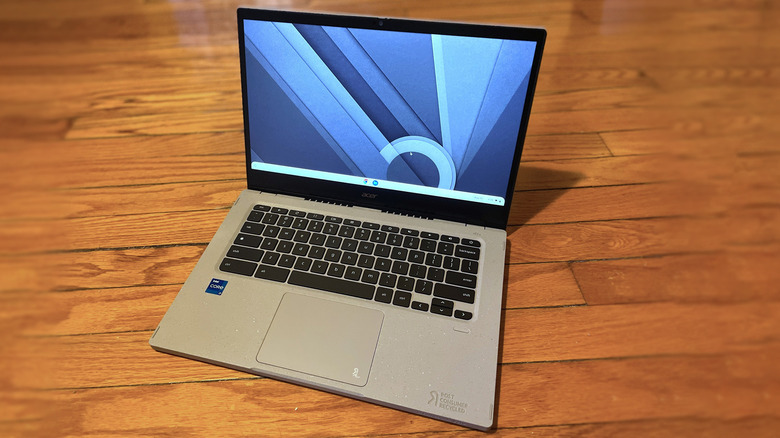 Acer is no stranger to Chromebooks, and it's no stranger to eco-friendly laptops, but the Acer Chromebook Vero 514 marks its first time combining the two. What you get here is what Acer is touting as a durable, semi-recycled Chromebook that caters to both the expected Chromebook types (students, teachers, tech enthusiasts, and people working from home), as well as those who want an affordable not-quite laptop that leaves a smaller impact on the environment in its wake.

On the surface, and according to the spec sheet, it looks a lot like your average laptop. It even performs like one — for the most part. However, if you aren't familiar with Chromebooks, don't expect to find your typical laptop here. It's more like a fusion between a laptop and an Android tablet. You'll be running ChromeOS, so your app and game selections are limited to what's available on Google Play and in-browser streaming. You could try to install Windows, but as with other Chromebooks, it's definitely not recommended.

So instead of thinking about what the Chromebook Vero 514 could be, let's talk about what it is. This machine consists of a set of features that both fall behind and out-pace my trusty MacBook Pro.

Out of the box 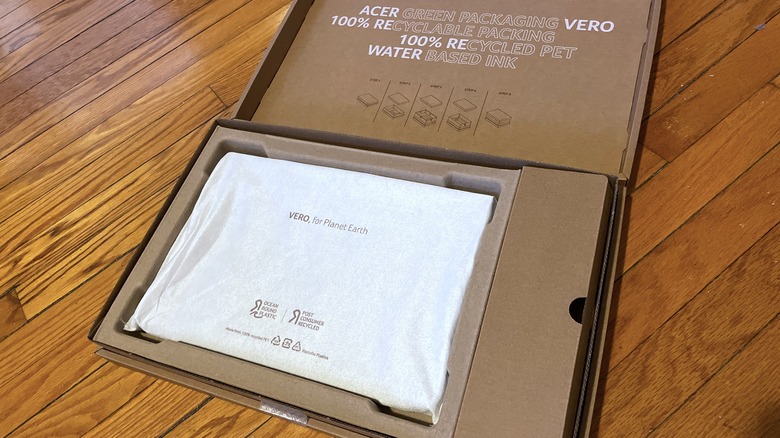 My initial impressions were a bit mixed, which is partially my fault because I wasn't entirely sure what to expect when I opened the box. The Chromebook Vero 514 shows off its eco-friendliness immediately with molded pulp packaging, with no plastic to be found aside from the twist ties used to keep the cables tucked away.

Everything else is essentially a combination of recycled paper and cardboard — from the box to the tray that the Chromebook Vero 514 sits in, right down to the protective sleeve and the sheet that sits between the screen and the keyboard. It was a bit bizarre at first, but not unwelcome.

The Chromebook Vero 514 itself — the hardware — gave me the biggest pause. It's large, flat, and grey. The surface has a texture that resembles a recycled coffee cup sleeve. The semi-embossed logos and letters on the top and bottom are practically invisible until the light hits them just right — at which point they offer an almost premium shine. Suffice it to say, I had no idea what I was in for before I started the unboxing process. 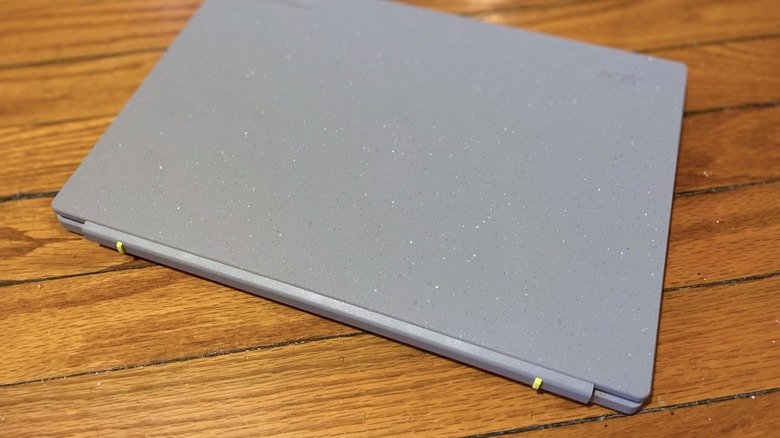 There are a lot of Chromebooks out there. Like a lot a lot. Perhaps the best way for the Chromebook Vero 514 to stand out is its professed eco-friendliness then? It's certainly the first thing that caught my attention (once I figured out what I was looking at).

Much of the hardware is made using recycled plastics, as well as recycled ocean plastics. What goes where depends on the component but Acer says that both the chassis and screen bezel are 30% post-consumer recycled (PCR) plastics, while the keyboard keys and speakers are 50% PCR plastic. And that ocean plastic? It's in the fan housing and the OceanGlass touchpad.

Combine all of that with the box itself and that's a lot of reused materials, which is something I can definitely get behind. Sure it's not 100% recycled materials but there's still a significant amount of it here, and from what I've been able to tell it hasn't resulted in any sort of impairment on the Chromebook Vero 514.

How does it feel? 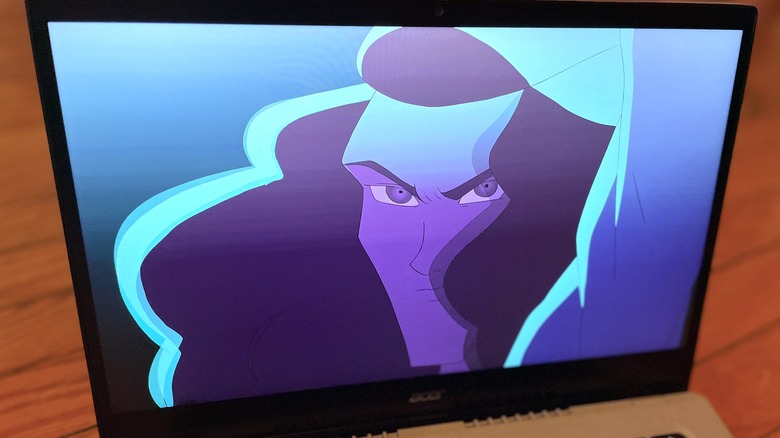 In a tactile sense, the device feels kind of strange at first. Not necessarily in a bad way, but the "recycled material texture" on the frame of the Vero 514 is a little bit rougher than you might expect when you're mostly used to more standard laptops.

Actually using the Vero 514 felt pretty good. Keep in mind we're looking at an early pre-production unit, so things could be a little (or a lot) different once it hits mass retail, but the Chromebook was pretty quick to turn on, shut down, and wake up from sleep mode. Oddly what stuck out to me the most was the hinge, which feels a bit tighter than the average notebook.

I wasn't able to install any Android games for my test run, but I did try a few out in Chrome and everything ran smoothly. The same goes for videos, which looked noticeably more crisp and vibrant than what I'm used to when comparing them side-by-side to my MacBook Pro (13-inch, M1, 2020). The Vero 514's screen was also a little larger, and the model I looked at had touch screen functionality along with some much-appreciated glare reduction.

The only semi-disappointment I ran into was the speakers. Or rather, the direction of the speakers. The sound quality is just fine — great, even — but the sound would change significantly depending on where my head was in relation to the Vero 514. Some angles would make things sound muffled, others would be a bit tinny, but straight-on was perfect. It likely won't be an issue if you're using it on a desk or other stationary surface, but it could be a problem if you're moving around or setting it up on a lower surface like your lap or on a couch. 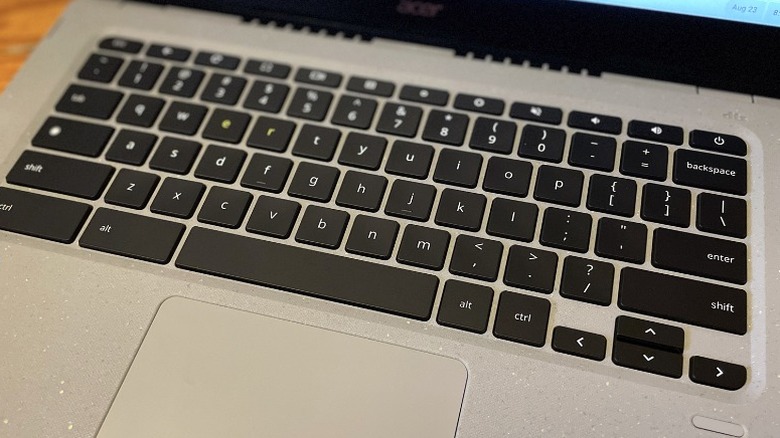 The model we're working with is sporting a 14-inch FHD IPS touch display along with an Intel Core i7-1255U, 16GB LPDDR4 memory, and 256GB PCIe NVMe SSD — which puts it at the high end of Chromebook Vero 514 models. And according to Acer all models will use Intel Iris Xe Graphics, weigh 3.09 pounds (1.4 kg), and support DTS Audio with two upward-facing speakers. All models also claim up to 10 hours of battery life, which I wasn't able to give a proper test as we're looking at a pre-production unit, but I can say that in the time I used it the Vero 514 seemed to hold onto a charge just fine. I actually didn't need to charge it out of the box, or while I was testing it out.

Source: https://www.slashgear.com/976832/acer-chromebook-vero-514-first-impressions-with-eco-friendly-chromeos-hardware/
We use cookies to ensure that we give you the best experience on our website. If you continue to use this site we will assume that you are happy with it. Ok