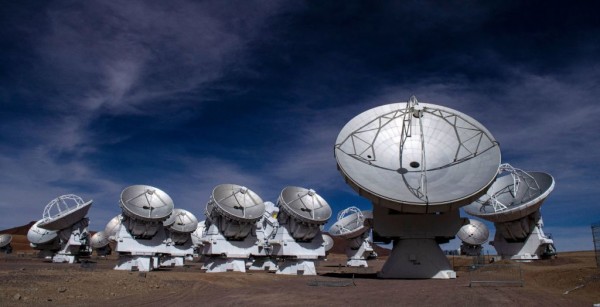 According to a report from the South China Morning Post (SCMP), China is constructing the largest array of telescopes in the world intended for studying explosions in the Sun.

The Daocheng Solar Radio Telescope (DSRT) array will aid researchers in their understanding of coronal mass ejections, which are enormous solar eruptions that can take down the internet and interfere with satellite communications throughout the world.

(Photo : ALBERTO PENA/AFP via Getty Images) View of radio telescope antennas of the Atacama Large Millimeter/submillimeter Array (ALMA) project, at the Chajnantor plateau, in San Pedro de Atacama, Atacama desert, some 1500 km north of Santiago, Chile, on May 18, 2022. - The ALMA powerful radiotelescope, located at over 5,000 metres of height in Atacama desert, considered the most advanced instrument in the world, started operating after being closed for two years during the COVID-19 pandemic.

The DSRT is being built on a plateau in the southwest Chinese province of Sichuan. When it is complete, the enormous array of solar radio telescopes will have a circumference of 1.95 miles (3.14 kilometers). It is also equipped with 313 dishes with a diameter of 19.7 (6 meters).

Massive plasma and magnetic field ejections from the corona, the Sun's surface, are known as coronal mass ejections (CMEs). They launch waves of electrically charged particles in the direction of the outer Solar System.

Although the Earth's magnetic field typically shields us from these solar flares, extremely powerful CMEs have the potential to destroy electrical equipment, including satellites and internet providers.

Large CMEs are more likely to develop now since the Sun is presently in the active phase of its 11-year solar cycle.

The large solar storm Carrington Event raged the space back in September 1859, a few months before the solar maximum took place in 1860.

In March of 2021, we went through a G3 storm, which is a fairly typical storm. However, even a G2 can do a lot of harm. SpaceX proved this in February when it lost 40 satellites after a solar storm.

According to a study, there is an annual average 4% probability of a major solar storm and a 0.7 percent chance of another Carrington event.

However, according to the experts, a super-storm could occur more frequently than we believed, indicating that it could occur at any time.

Hence, this array of telescopes could help scientists in determining upcoming solar storms.

Read also:  A Solar Storm Will 'Directly Hit' The Earth and Cause Signal Disruptions - Expert Says

When Will The Construction Be Finished?

According to the SCMP, the DSRT's construction will be completed this year as planned. Space.com also reported that China's larger plans for a ground-based space environment monitoring network known as the Chinese Meridian Project include the creation of the telescope array.

The Chinese Spectral Radioheliograph, a different array being developed for the project, is also intended to track solar eruptions. It will examine solar activity over a larger frequency range than the DSRT and be made up of 100 dishes arranged in a three-arm spiral.

The National Space Science Center (NSSC) of the Chinese Academy of Sciences is in charge of the Chinese Meridian Project, which plans to run about 300 instruments all over the country, with the help of more than ten Chinese universities and research institutions.