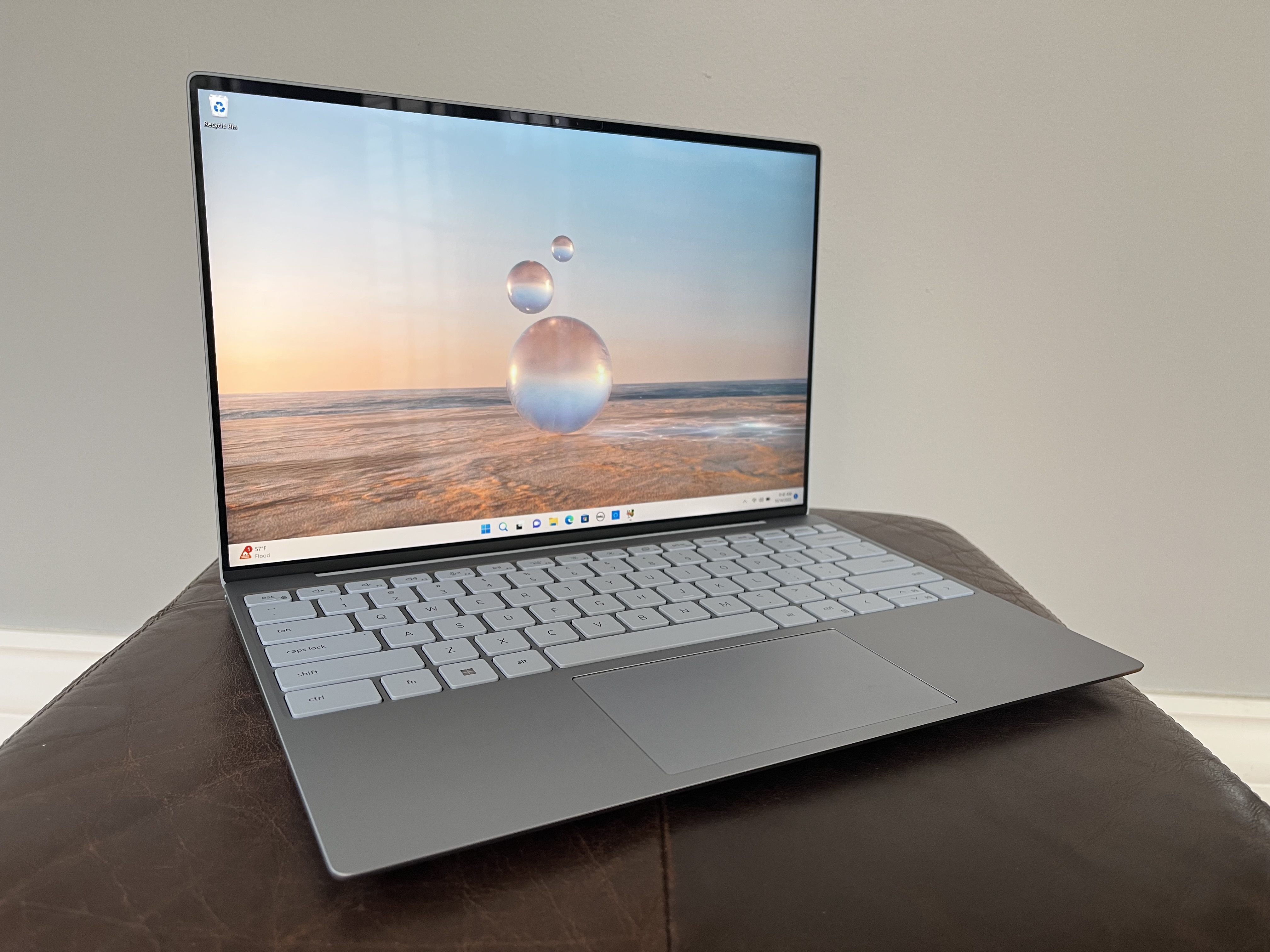 The XPS 13 is a beauty. Among midrange laptops, it boasts the sleekest, most compact design, packing a 13.4-inch 16:10 display into an enclosure that looks hardly any larger than an 11-inch Chromebook. But this is no Chromebook. Made from machined aluminum in an alluring blue hue and only a half an inch thick, the XPS 13 has premium-grade looks. For regular trips and daily commutes, the XPS 13 is an easy travel mate.

Despite its luxurious looks, the XPS 13 is a midrange ultraportable. It starts at $749 with Dell’s current discount and our test system’s upgrades still keep the price at a reasonable $1,149. Our test system features the baseline CPU, a 12th-gen Core i5, that provides acceptable application performance but still trails that of other midrange laptops that dial back the design touches and put more of their budget toward more capable Core i7 parts. It also lacks an OLED panel and 1080p webcam, two features that are becoming more common on midrange laptops. And we found it annoyingly difficult to open the laptop’s lid, a seemingly small issue that became a great nuisance in quick order.

Our Dell XPS 13 test system is selling for $1,149 at its current discount from Dell and features the following specs:

The XPS 13 starts at $999, but Dell offers constantly revolving discounts on its site and the baseline model is currently discounted to $749. It features a Core i5-1230U, 8GB of RAM. a 512GB SSD, and a non-touch 13.4-inch display. While it’s good to see a 512GB SSD offered as the default storage option instead of an undersized 256GB unit, we wish Dell skipped past the meager 8GB of RAM and offered 16GB at minimum. Our test model features the 16GB memory upgrade, which adds a hefty $150 to the bill. Adding touch support to the display adds another $100, which feels steep since it doesn’t come with a bump in resolution or, better yet, an OLED panel.

The XPS 13 is a vision in metallic blue. The subtle shade of blue allows it to stand out from the sea of brushed aluminum laptops in silver. The lid, bottom panel and keyboard deck are tinted aluminum in a blue hue that Dell calls “Sky.” There is also an “Umber” option that’s a purplish brown. The keyboard is made to match. The keys on our Sky test system are an icy blue and, appropriately enough, look really cool.

Opening the lid to get to the keyboard, however, is a task more difficult than it ever should be. Most laptops have a notch on the front edge that gives you the needed space for your fingertip to find purchase to raise the lid. The XPS 13 is completely devoid of such helpful notching. The front edge of the lid is angled and overhangs from the keyboard deck, but it is not wide enough for you to lift the lid without also lifting the entire laptop. I found I needed to use my fingernail to pry open the lid. In short order, opening the XPS 13 felt like trying to get to the nut inside a pistachio shell that has only the smallest sliver of an opening.

As with the display, Dell wastes no space with the keyboard — it runs from edge to edge. The keyboard feels roomy and there are no shortened keys to get accustomed to. The keys offer shallow travel and snappy feedback for a pleasant and speedy typing experience. There’s two-level backlighting for working on a redeye or an otherwise dark environment. The power button resides in the upper-right corner of the keyboard and doubles as a fingerprint reader for easy, secure logins.

The compact design doesn’t leave much room for the touchpad, but Dell made it about as large as can be given the limited space between the bottom of the keyboard and the bottom edge of the laptop. It offers smooth gliding and an accurate response, and the click mechanism is perfect with just the right amount of travel.

The best two attributes of the XPS 13’s display are its brightness and tallness. It has a 16:10 aspect ratio and is rated for 500 nits. At 16:10, the display is taller than a 16:9 screen, and the added vertical space makes the display feel larger than its 13.4-inch size. The effect of having a taller aspect ratio grows in importance as the size of the panel shrinks. A larger, 15- or 16-inch screen feels roomy at 16:10 or 16:9, but a smaller 13-inch screen can feel cramped at 16:9 when you are constantly scrolling through web pages and documents. The XPS 13’s 13.4-inch screen certainly isn’t the easiest on which to multitask, but the added height the 16:10 ratio affords does allow you to see more on the screen with less scrolling required.

I measured the panel against its 500-nit rating and found it to hit roughly 425 nits at maximum brightness. While it’s disappointing the actual brightness wasn’t closer to its rating, the panel is plenty bright for every indoor setting we tried, from a sunny, south-facing breakfast nook to an office under ample artificial lighting.

The display’s 1920×1200 resolution is more than sufficient for the size of the display. Dell set the display scaling to 150%, which resulted in large text and icons that remained crisp and clear. I found that setting the scaling to 125% provided a larger workspace while keeping text at a font size that was still large enough to be read easily without squinting.

While superior OLED panels are becoming more common in midrange laptops, the XPS 13 appears just out of reach of OLED-land. It features a basic LCD panel with decent contrast and colors but can’t match the quality of an OLED panel that we have seen on models that cost only a bit more than the XPS 9315. It’s a shame the touch panel option doesn’t also come with an OLED upgrade.

The laptop’s stereo speakers produce better sound than expected, although I will note I have low expectations for any laptop with only a pair of two-watt speakers. Especially on such a thin and compact system, the XPS 13’s audio output is fairly dynamic with even a hint of bass. It has enough muscle to fill a small room, although the clarity quickly declines when you push the volume past 70%.

The webcam is a disappointment. While 1080p webcams have quickly become the de facto option on all but the must budget of laptops, the XPS 9315 features a 720p webcam that suffers from a grainy image with over saturated colors. I would expect to see a 720p camera on a low-end model from Dell’s mainstream Inspiron line, but every XPS laptop should come equipped with a 1080p camera by now.

Dell offers a sparse port selection on the XPS 9315. The laptop features two Thunderbolt 4 ports — one on each side of the system. That’s it. There’s not even a headphone jack. To supplement the minimal ports, Dell includes two adapters in the box. There’s one USB-C to 3.5mm jack dongle for connecting headphones and another USB-C to USB-A dongle for your USB-A peripherals. You’re on your own for adapting to an HDMI connection.

Our Dell XPS 13 features the Intel Core i5-1230U CPU, 16GB of RAM, integrated Intel Iris Xe graphics, and a 512GB SSD. The Core i5-1230U is a chip from Intel’s 12th generation of Core processors with two performance cores and eight efficiency cores. It’s a member of the U-series of 9-watt chips that prioritizes efficiency over power.

To see how it stacks up to its ultrabook competition, we looked at its performance against that of the Acer Aspire 5 15 based on the 15-watt Core i5-1235U. You’ll also see the Acer Swift 5 and Samsung Galaxy Book2 Pro 360 in the charts; each features a Core i7-1260P, a chip from the P series that sits between Intel’s efficient U-series and high-powered H-series. We also included last year’s Dell XPS 13 2-in-1 9310 that features an 11th-gen Core i7 part. Rounding out the charts are two compact ultraportables with AMD Ryzen 7 5800U in the HP Pavilion Aero 13 and Lenovo IdeaPad Slim 7 Carbon.

In anecdotal testing, the XPS 13 felt peppy during general Windows use, including multitasking scenarios. Apps opened and closed quickly, and I was able to juggle multiple apps and windows without any lag. The laptop also operated in near silence, which is not always a given on a thin, compact system that can present thermal challenges.

Our first benchmark is PCMark 10, which measures performance on everyday computing work including office productivity tasks, web browsing, and video chats. With only two performance cores, the XPS 13 limped to a last place finish on PCMark 10, trialing the other system that featured more processing cores as well as the Acer Aspire 5 15, whose Core i5-1235U has the same number of performance (2) and efficiency (8) cores as the XPS 13’s Core i5-1230U. The Aspire 5 15’s CPU, however, is a 15-watt chip compared with only 9 watts for the XPS 13. That extra wattage results in greater PCMark performance.

Our HandBrake benchmark tests how a laptop is able to handle crushing CPU loads over a lengthy period—in this case, transcoding a 30GB MKV file to a format suitable for Android tablets using HandBrake, the free video encoding utility. The XPS 13 managed to finish ahead of last year’s Dell XPS 13 2-in-1 but took much longer to complete the test than the other systems with 12th-gen Intel processors and AMD Ryzen 7 5000-series chips.

Next up is Cinebench, another CPU-intensive test but one that renders a complex 2D scene over a short period of time. The XPS 13 finished dead last and well off the pace set by the laptops with CPUs that feature a greater number of processing cores.

The XPS 13’s showing in labs testing did not improve with 3D graphics testing. On 3DMark’s Time Spy benchmark, it finished last among the group.

To test a laptop’s battery life, we loop a 4K video using Windows 11’s Movies & TV app, with the laptop set to Airplane mode and earbuds plugged in. We set the screen brightness at a relatively bright 250 nits to 260 nits, which is a good brightness for watching a movie in an office with the lights on. We had hoped that with its efficient Core i5 U-series chip, the XPS 13 would flip the script and finish toward the top of the chart for battery life. Sadly, it did not. It failed to top the 10-hour mark on our battery drain test, a threshold most of the ultrabooks here were able to exceed.

At first blush, the Dell XPS 13 is an attractive ultraportable for its compact design, thin profile, and unique tinted aluminum material. As soon as you attempt to raise the lid, however, the bloom is off the rose. It’s frustratingly difficult to perform the simple act of opening the laptop. In addition, competing ultrabooks offer better performance and longer battery life than the XPS 13 and its 12th-gen Core i5 chip. Further, the 720p webcam is behind the times and, with only two ports, you are forced to keep track of two tiny adapters. For roughly the same price, the slightly larger but still highly portable HP Pavilion 14 Plus offers better performance along with an OLED display and 1080p webcam.

Source: https://www.pcworld.com/article/1355530/dell-xps-13-9315-review.html
We use cookies to ensure that we give you the best experience on our website. If you continue to use this site we will assume that you are happy with it. Ok