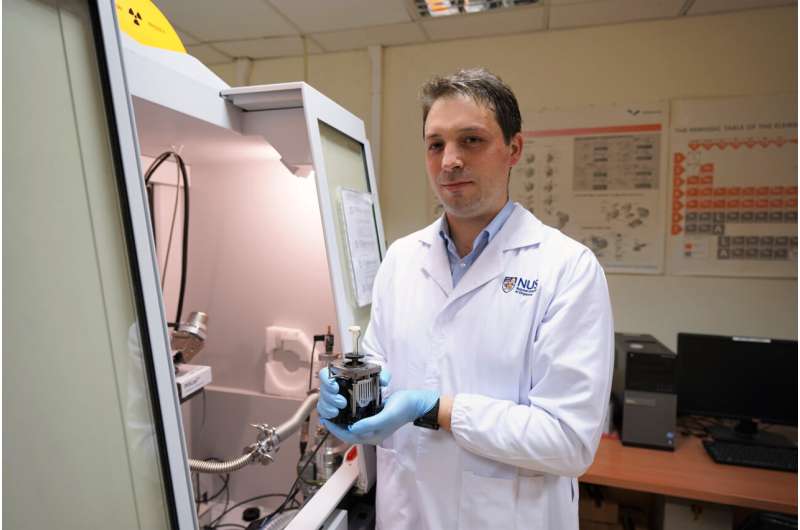 A safer, greener, and inexpensive rechargeable battery for powering electric vehicles, mobile phones and many other applications could be a step closer following a breakthrough discovery by NUS researchers.

The team led by Assistant Professor Pieremanuele (Piero) Canepa (Department of Materials Science and Engineering at the NUS College of Design and Engineering) has identified a new sodium-ion-based solid electrolyte composition that may enable ultrafast battery charge and discharge.

Their research was recently published in Nature Communications.

"Conventional and widely used lithium-ion batteries are plagued by safety issues, particularly due to the high flammability of the liquid electrolytes they contain," Asst Prof Canepa said.

"The challenge has been finding safer solid-state alternatives that can compete in terms of, charging speed, longevity and potentially charging capacity."

Using non-flammable ceramic materials—known as solid electrolytes—to create a fully solid-state battery has been widely seen by researchers as the best prospect to deliver safer, high-capacity batteries needed to meet the energy demands of a low carbon future.

The difficulty has been in developing the right composition of ceramic material able to deliver performance that competes with flammable liquid electrolytes of commercial lithium-ion batteries.

The novel solid-state composition developed by the NUS team uses a class of solid electrolytes known as NASICONs (or Natrium Super Ionic Conductors) that were first discovered around four decades ago by Hong and Goodenough –the 2019 Nobel Laureate in Chemistry.

In addition to being safer, by using sodium rather than lithium the battery has the added benefit of being cheaper and easier to produce.

"Most of the world's lithium, which is a fairly rare element in itself, is sourced from just a few places—primarily Chile, Bolivia and Australia," said Asst Prof Canepa. "Using a battery that relies on sodium however is much more efficient, as sodium can be extracted easily and even cleanly—even in a small place like here in Singapore."

The discovery by Asst Prof Canepa's team was made using a bottom-up approach that involved first developing a theoretical atomic-scale model of the NASICON ceramic composition using high-powered supercomputers and novel algorithms developed by the same team.

The designed composition was then experimentally synthesized, characterized and tested by the team of Professor Masquelier at the CNRS Laboratoire de Réactivité et Chimie des Solides, in Amiens, France. The speed of ion motion in the new NASICON composition was then measured at NUS and at the Institute of Energy and Climate Research, in Jülich, Germany.

"The method we used enables researchers to accelerate the development and optimization of new solid electrolytes for all-solid-state batteries, which are crucial to achieving safer batteries with high power density," Asst Prof Canepa said.

"This advanced approach, we believe, will be critical to developing the next generation of clean energy storage technologies."

The next stage of the research, which the team are now working on, will focus on developing a full-size solid battery using the NASICON ceramic, and demonstrating its charging and discharging performance.

Asst Prof Canepa leads the Canepa Research Laboratory at NUS, which leverages the power of supercomputers and advanced simulation algorithms to push the boundaries in the transformation and storage of clean energy.

In a related study, researchers at the Canepa Lab examined one of the key challenges in the development of all-solid-state batteries: the interface between the alkali-metal anode and the solid electrolyte, which is often unstable and a source of battery failure.

The stability of this interface depends on the properties of the chemically distinct interlayer that forms at the boundary, known as the solid electrolyte interphase.

In their study, recently published in the journal PRX Energy, the team led by Research Fellow Yuheng Li, studied the battery interface between a lithium-metal anode and a well-known solid electrolyte, at which a self-limiting and stable interphase forms.

To understand the origin of this stability, the authors used atomic-scale simulations to model the electronic conductivity of the interphase. They found that the interphase is electronically insulating, and thus stops progressive formation of itself and stabilizes the interface.

The team says their findings provide design guidelines on stable battery interfaces, helping to accelerate the commercialization of safe and high-performance all-solid-state batteries.

Source: https://techxplore.com/news/2022-08-discovery-path-safer-solid-state-sodium.html
We use cookies to ensure that we give you the best experience on our website. If you continue to use this site we will assume that you are happy with it. Ok