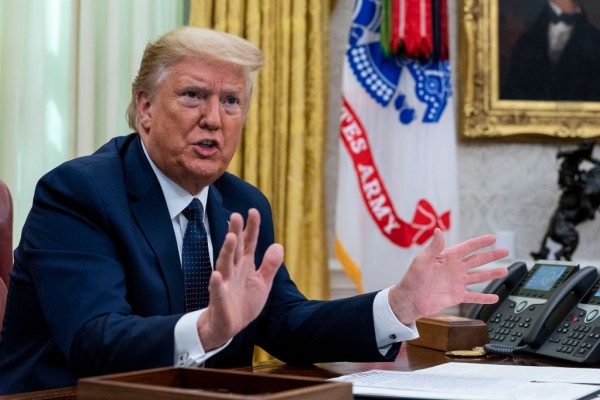 Due to insufficient content filtering, the Google Play Store has not yet given the green light to Donald Trump's social networking platform Truth Social, a Google representative stated on Tuesday, Aug. 30.

(Photo : Doug Mills-Pool/Getty Images)) WASHINGTON, DC - MAY 28: U.S. President Donald Trump speaks in the Oval Office before signing an executive order related to regulating social media on May 28, 2020 in Washington, DC. Trump's executive order could lead to attempts to punish companies such as Twitter and Google for attempting to point out factual inconsistencies in social media posts by politicians.

The delay on Google Play is a blow for Truth Social, which debuted on Feb. 21 in the Apple App store. As noted by Reuters, about 40% of US smartphone sales are Android devices.

"On August 19, we notified Truth Social of several violations of standard policies in their current app submission and reiterated that having effective systems for moderating user-generated content is a condition of our terms of service for any app to go live on Google Play," the tech giant said in a statement.

Google claimed it had raised concerns with Truth Social regarding violations of the Play Store guidelines that forbid content such as physical threats and incitement to violence.

In a press release, Trump Media Technology Group (TMTG), the parent company of Truth Social, stated that it had consistently "worked in good faith with Google" to guarantee that the Truth Social Android App adheres to Google's policies without jeopardizing their promise to be an avenue for free speech.

"Moreover, some of our competitors' apps are allowed in the Google Play Store despite rampantly violating Google's prohibition on sexual content and other policies, whereas Truth Social has zero tolerance for sexually explicit content," the company added.

It is worth noting that Truth Social would still be allowed to distribute its app through other internet channels other than Google's online store, such as its website.

The only entry point to the company's mobile devices is Apple's App Store, where a version of Truth Social was still accessible as of Wednesday.

Truth Social is Trump's response to social media apps like Twitter, where he was kicked off after a crowd he incited attacked the US Capitol in January 2021.

According to a report last week by Fox Business Network, the social media network has ceased paying RightForge, which hosts it, and is owed $1.6 million.

Trump Media and Technology Group reported in a regulatory filing that it had secured an extra $15 million in cash, which it estimates would allow it to cover its expenses through the end of April next year.