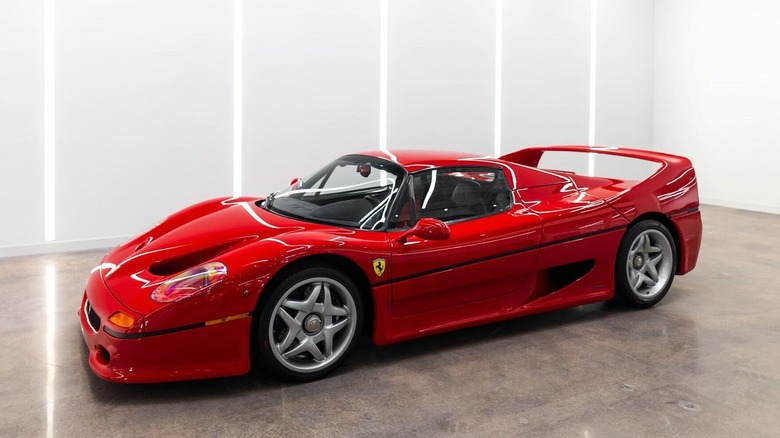 Following the F40 of 1987 — ranked among the best Ferraris of all time — Ferrari celebrated its 50th birthday with the F50. Albeit two years early, in 1995, to get ahead of looming changes to U.S. emissions laws.

Said by the manufacturer to be derived directly from the F1 motor, the F50's 4.7-liter, naturally-aspirated V12 was mounted to the carbon chassis, becoming a stressed member and turning the F50 into "the closest you could get to a Formula One car for the public road," Ferrari says. Producing 513 hp, the car reaches 60 mph in 3.8 seconds and has a claimed 201 mph top speed.

Sticking to its usual philosophy of building one fewer car than it believes it can sell, Ferrari built 349 examples of the F50, with just 55 allotted for the U.S. market.

It carried a list price of $475,000, but in the U.S. was distributed by Ferrari North America using a leasing scheme, explained Car and Driver in 1997. Comprising a $240,000 down payment, 24 monthly payments of $5,600 and a final payment of $150,000, the scheme was intended to prevent speculators from selling the limited-run car for a profit the moment they took delivery. There was also a lengthy questionnaire and application process to help weed out flippers looking to make a quick buck.

Now's your chance to buy one

Being over three times rarer than its F40 predecessor, F50s don't come up for sale all that often. But when they do, at least in recent years, the price is considerably higher than what it cost new.

F50s breached the million dollar mark over a decade ago, and according to sales data from Classic.com, cleared the $2 million barrier in 2016, then soared past $3.5 million in 2021, before passing $4 million in March 2022, then $5 million just five months later. Clearly, the F50 is a car in demand.

But despite this rampant appreciation, not all examples follow the same steep trajectory. Mileage is a huge factor here. A pair of F50s sold at two different auctions held on consecutive days in August 2022 achieved $5.175 million and $3.305 million. Their mileage? Just under 5,000 miles for the former and 19,300 for the latter.

And that's why the latest example to go under the hammer is so interesting. To be auctioned by RM Sothebys at Miami Beach, Florida on Dec. 10 is an F50 with just 625 miles on the clock.

Finished in Rosso Corsa red (just four F50s are black and 31 are yellow) with black interior, this example was the eighth to be built and has two previous owners. The car, Sotheby's says, was completed in Oct. 1995 and delivered to its first owner, a Ferrari dealership in Singapore called Hong Seh Motors, where it was kept as a personal car by dealership principal Alfred Tan.

Although described as an enthusiast, Tan stored the car at home and never drove it to ensure the odometer displayed only delivery mileage. After 18 years of ownership, the F50 was sold in 2013 to an enthusiast in Texas, who imported it to the U.S.

Sotheby's says: "The F50 has been serviced ever since by the highly esteemed marque experts at Norwood Auto Italia of Carrollton, Texas, while only being driven for minimal exercise miles and occasional enjoyment."

The F50 received its Ferrari Classiche Red Book in June 2014, proving it has matching-numbers chassis, engine, gearbox and bodywork. Ahead of being put up for auction, in October 2022 the F50 had an inspection, accessory belt replacement, air, fuel and oil filter replacement, brake and clutch flush, and an oil change. The car comes with a fitted luggage set, tool kit and a flight case for storing and transporting the removable roof.

The auction house has given this F50 a guide price of $5.5 million to $6.5 million, which, if achieved, could see this become the most valuable F50 ever sold in public.

This car is described by Sotheby's as "immaculate" and "probably the best-condition example of Maranello's important 50th anniversary model that one might ever encounter. The pristine early-production F50 would make an exquisite addition to any sporting collection".

Source: https://www.slashgear.com/1125928/even-after-18-years-in-a-garage-this-ferrari-is-worth-millions/
We use cookies to ensure that we give you the best experience on our website. If you continue to use this site we will assume that you are happy with it. Ok