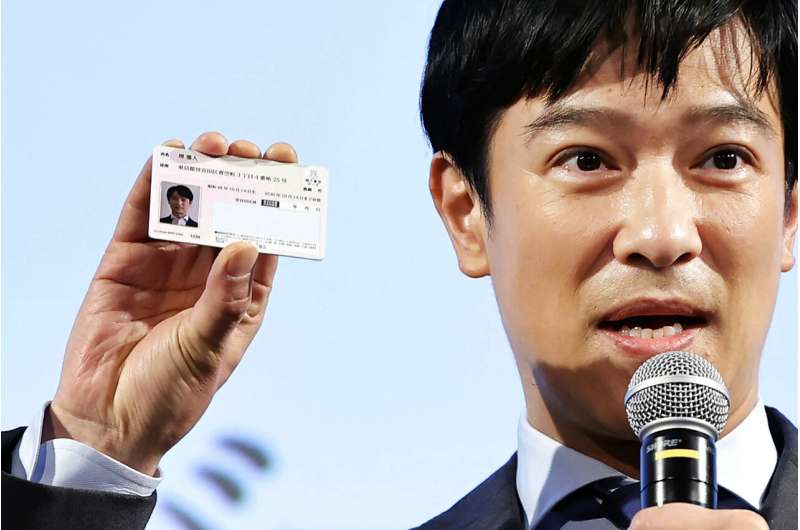 Japanese actor Masato Sakai shows a sample of My Number card during a promotional event in Tokyo on March 8, 2021. Japan has stepped up its push to catch up on digitization by telling a reluctant public they have to sign up for digital IDs or possibly lose access to their public health insurance. Credit: Kyodo News via AP

Japan has stepped up its push to catch up on digitization by telling a reluctant public they have to sign up for digital IDs or possibly lose access to their public health insurance.

As the naming implies, the initiative is about assigning numbers to people, similar to Social Security numbers in the U.S. Many Japanese worry the information might be misused or that their personal information might be stolen. Some view the My Number effort as a violation of their right to privacy.

So the system that kicked off in 2016 has never fully caught on. Fax machines are still commonplace, and many Japanese conduct much of their business in person, with cash. Some bureaucratic procedures can be done online, but many Japanese offices still require "inkan," or seals for stamping, for identification, and insist on people bringing paper forms to offices.

Now the government is asking people to apply for plastic My Number cards equipped with microchips and photos, to be linked to drivers licenses and the public health insurance plans. Health insurance cards now in use, which lack photos, will be discontinued in late 2024. People will be required to use My Number cards instead.

That has drawn a backlash, with an online petition demanding a continuation of the current health cards drawing more than 100,000 signatures in a few days.

Opponents of the change say the current system has been working for decades and going digital would require extra work at a time when the pandemic is still straining the medical system.

But the reluctance to go digital extends beyond the health care system. After numerous scandals over leaks and other mistakes, many Japanese distrust the government's handling of data. They're also wary about government overreach, partly a legacy of authoritarian regimes before and during World War II. 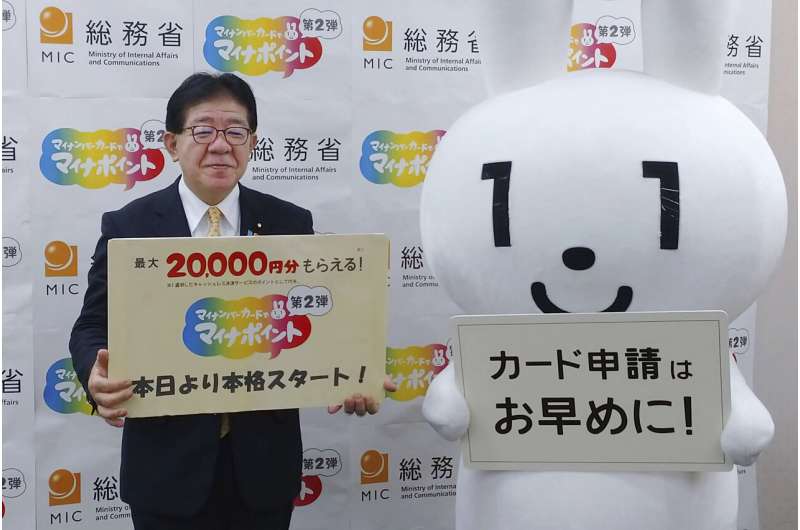 Japan's Minister of Internal Affairs and Communications Yasushi Kaneko attends an event to promote My Number cards in Tokyo on June 30, 2022. Japan has stepped up its push to catch up on digitization by telling a reluctant public they have to sign up for digital IDs or possibly lose access to their public health insurance. The sign, right, reads " Apply for My Number card as soon as possible!" Credit: Kyodo News via AP

Saeko Fujimori, who works in the music copyright business, said she's supposed to get My Number information from the people she deals with, but many balk at giving it out. And no one is all that surprised she has trouble getting that information, given how unpopular it is.

"There is a microchip in it, and that means there could be fraud," said Fujimori, who has a My Number but doesn't intend to get the new card. "If a machine is reading all the information, that can lead to mistakes in the medical sector, too."

"If this was coming from a trustworthy leadership and the economy was thriving, maybe we would think about it, but not now," Fujimori said.

Something drastic may have to happen for people to accept such changes, just as it took a devastating defeat in World War II for Japan to transform itself into an economic powerhouse, said Hidenori Watanave, a professor at the University of Tokyo.

Japanese traditionally take pride in meticulous, handcraft-quality workmanship and many also devote themselves to carefully keeping track of documents and neatly filing them away.

"There are too many people worried their jobs are going to disappear. These people see digitization as a negation of their past work," said Watanave, who spells his last name with a "v" instead of the usual "b." 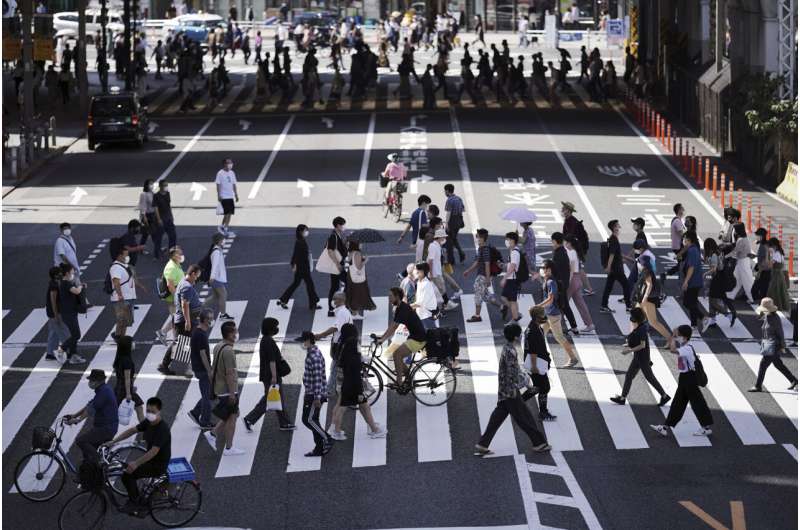 Visitors wearing protective masks to help curb the spread of the coronavirus walk at pedestrian crossings in Tokyo on Sept. 20, 2021. Japan has stepped up its push to catch up on digitization by telling a reluctant public they have to sign up for digital IDs or possibly lose access to their public health insurance. Credit: AP Photo/Eugene Hoshiko, File

The process of getting an existing My Number digitized is time consuming and very analog, it turns out. One must fill out and mail back forms sent by mail. Last month's initial deadline was extended, but only about half of the Japanese population have a My Number, according to the government.

"They keep failing in anything digital and we have no memories of successful digital transformation by the government," said Nobi Hayashi, a consultant and technology expert.

Hayashi cited as a recent example Cocoa, the government's tracing app for COVID-19, which proved unpopular and often ineffectual. He says the digital promotion effort needs to be more "vision-driven."

"They don't show a bigger picture, or they don't have one," Hayashi said.

Koichi Kurosawa, secretary-general at the National Confederation of Trade Unions, a 1 million-member grouping of labor unions, said people would be happier with digitization if it made their work easier and shorter, but it was doing just the opposite at many Japanese work places.

"People feel this is about allocating numbers to people the way teams have numbers on their uniforms," he said. "They are worried it will lead to tighter surveillance."

That's why people are saying No to My Number, he said in a phone interview with The Associated Press. 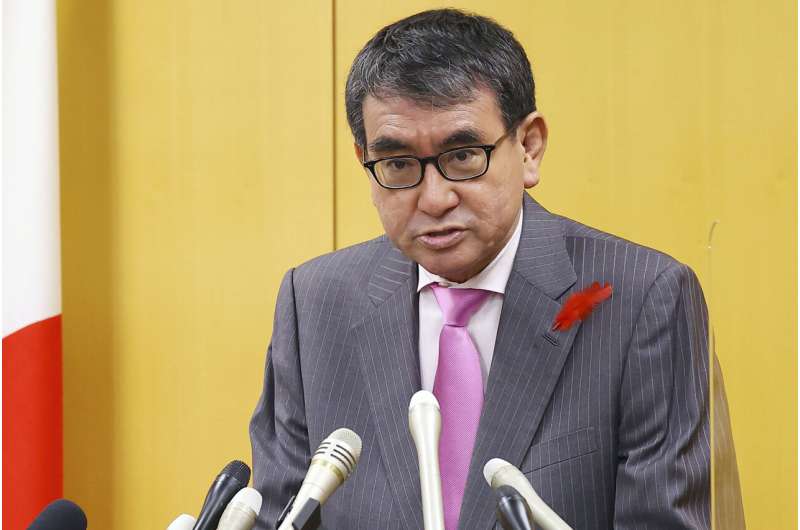 Japan's Minister of Digital Affairs Taro Kono speaks during a press conference in Tokyo on Oct. 13, 2022. Japan has stepped up its push to catch up on digitization by telling a reluctant public they have to sign up for digital IDs or possibly lose access to their public health insurance. Credit: Kyodo News via AP

Yojiro Maeda, a cooperative research fellow at Nagasaki University who studies local governments, thinks digitization is needed, and My Number is a step in the right direction.

"You just have to do it," Maeda said.

On Monday, Prime Minister Fumio Kishida acknowledged concerns about My Number cards. He told lawmakers in Parliament that the old health insurance cards will be phased out but the government will arrange for people to continue to use their public health insurance if they are paying into a health plan.

Japan's Minister of Digital Affairs, Taro Kono, acknowledged in a recent interview with The Associated Press that more is needed to persuade people of the benefits of going digital.

"To create a digitized society, we need to work on developing new infrastructure. My Number cards could serve as a passport that will open such doors," Kono said. "We need to win people's understanding so that My Number cards get used in all kinds of situations."

© 2022 The Associated Press. All rights reserved. This material may not be published, broadcast, rewritten or redistributed without permission.

Source: https://techxplore.com/news/2022-10-japan-buy-in-digital-ids.html
We use cookies to ensure that we give you the best experience on our website. If you continue to use this site we will assume that you are happy with it. Ok