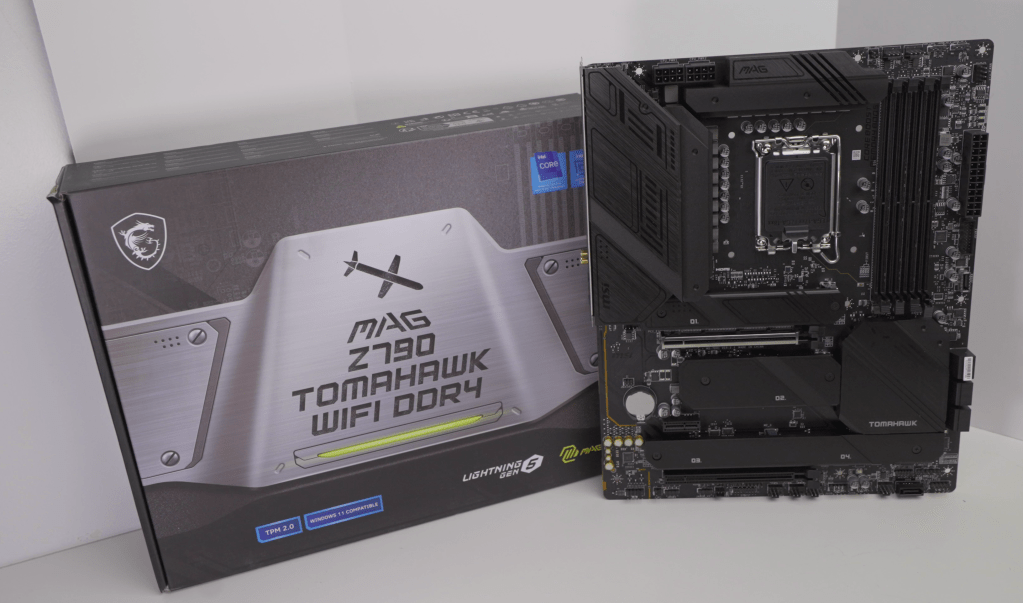 The MSI MAG Z790 Tomahawk WiFi DDR4 combines a decent set of features with a clean, if understated, design. It will likely appeal to gamers and content creators who don’t want anything too flashy. Overall, it packs a good amount of features into a relatively inexpensive motherboard, but the lack of DDR5 is bit disappointing.

Intel’s 13th-generation CPUs bring with them stellar performance, and part of their appeal is the varied motherboard ecosystem making entry more affordable. Remember, AMD’s AM5 Ryzen 7000 launch was somewhat stymied due to high platform costs, such as being DDR5-only.

With a reasonable price point, healthy offering of features, and an interesting design, this motherboard wants you to join the next generation. We’ll look at the specs, features, design, and performance attributes. Will the Tomahawk make your transition to the next gen a no-brainer? Let’s find out!

Let’s briefly list the specs, and then we’ll discuss what features are most important to keep in mind. You’ll be free to install either Intel’s 12th- or 13th-generation CPUs with this Z790 motherboard. Plus, you’re getting the benefits of the Z790 chipset, such as WiFi 6E and 2.5GbE LAN.

The unboxing experience is ordinary. No fancy packaging or quirky accessories here—just some SATA cables, Wi-Fi antennas, and a USB drive. You do get some cable stickers, so there’s some pizzaz for you there!

The Tomahawk has a balanced feature set that has gamers and content creators in mind. (If you can live with a few compromises for the price.)

First, this version will have DDR4. This makes it cheaper and easier for more users to enter the fray, as DDR5 is still more expensive. Performance is certainly better on DDR5, but it has diminishing returns for the cost. If your particular use case requires faster DDR5, you can always opt for the alternate Tomahawk version.

You’ll be treated to seven SATA ports—more than average of many motherboards recently. This will likely only appeal to some content creators who make heavy use of storage. Gamers will be more than fulfilled with the four NVMe slots, making for fast and cable-free builds! An extra plus is the MSI Ez M.2 system, for easier installation.

You’ll get a decent selection of USB ports, up to 10 on the back. Speedy USB 3.2 2×2 20Gb/s is also here, making content creators happy. No USB 4 or Thunderbolt—you’ll have to opt for a more expensive motherboard for those type of options.

Standard features such as Wi-Fi 6E, Intel 2.5GbE LAN, and the ALC4080 audio codec are all here. (Ample audio connections are a nice addition.) These features are often found on more expensive motherboards as well, so you’re getting a good baseline for the price here.

Of course, Clear CMOS and Flash BIOS are present, and are a blessing for anyone who installs and/or tinkers with hardware. The motherboard features debug LEDs, although we do miss the easier-to-read digital-code displays available on some higher-end motherboards.

There’s no “Start” button on the motherboard itself, but plenty of PWM fan and RGB headers. You’ll have more than enough options for CPU fans, and even CPU AIO coolers.

Overall, it offers a healthy feature set for gamers, as well as many content creators. Only very demanding users will need more features on higher-priced boards. (Such as 10GbE LAN, USB 4, and more PCIe Gen 5.)

The VRM heatsink looks substantial, and packs some serious angles. Continuing to the PCIe area, the M.2 “Shield Frozn” coverings are both functional and attractive. Materials used throughout are good quality, with a sharp design you can imagine in the hands.

The backplate area is run-of-the-mill as expected for a motherboard of this class. You’ll need more expensive options if you want a heavy-duty backplate.

The I/O shroud area is nicely designed on all sides—and comes with an integrated I/O shield to boot! The rest of the motherboard is typical, and it is an understated design. The blacked-out look is preferred here over the mirror finishes or RGB of flashier motherboards. It fits the Tomahawk branding nicely!

With the VRMs clocking in with a 16+1+1 “Duet Rail” design, it has the chops to handle the newest Intel CPUs. While it will do fine with the i9-13900K, many users may find a better “bang for the buck” by pairing a 13600K, or even 13700K with this class of motherboard. That may save you some money if you’re not going after top performance, alongside the DDR4 savings. DDR5 would in theory be faster, but you’re trading cost for very minor performance gains in most cases.

Performance on other areas will match most high-end motherboards in real-world use. Sure, you don’t get as many PCIe Gen 5 lanes, but Gen 4 is more than enough. Four onboard NVMe drives will scream—and Gen 5 drives are not even readily available yet. It’s starting to look like all you’ll need for those $309 bucks!

If you want to “get to know” your motherboard better, the best place is in the BIOS. MSI has done a great job making its BIOS easier to navigate and more intuitive in recent iterations. You’ll find everything from memory profiles and CPU overclocking, to BIOS updates and power settings.

Other items can also be accessed in MSI’s software suite. Its “MSI Center” has a wide variety of utility, from adjusting fan profiles, to setting the Mystic Light RGB options. If you’d prefer to avoid checking MSI’s website for drivers, you can use MSI’s Driver Utility Installer to find driver updates at the touch of a button. Overall, it’s a nice “extra” that can save some time from digging into the BIOS for quick adjustments.

Should you buy the MSI MAG Z790 Tomahawk WiFi DDR4?

The MSI MAG Z790 Tomahawk WiFi DDR4 combines a competent feature set with a sleek understated design. This will appeal to gamers, and content creators who don’t need all the bells and whistles.

With an MSRP of $309, it’s far from a budget offering—but alongside DDR4 it keeps platform costs more reasonable while still granting access to next-gen power. That’s one advantage the Z790 chipset has over the new AMD AM5 platform, which has a higher overall cost of entry.

The Tomahawk offers most of the features, and a few nice extras, that you’d expect from pricier models. Great I/O, many USB ports, and minimal unnecessary expensive options. This saves cost, while still including most of the goodies.

Source: https://www.pcworld.com/article/1398387/msi-mag-z790-tomahawk-wifi-ddr4-motherboard-review.html
We use cookies to ensure that we give you the best experience on our website. If you continue to use this site we will assume that you are happy with it. Ok