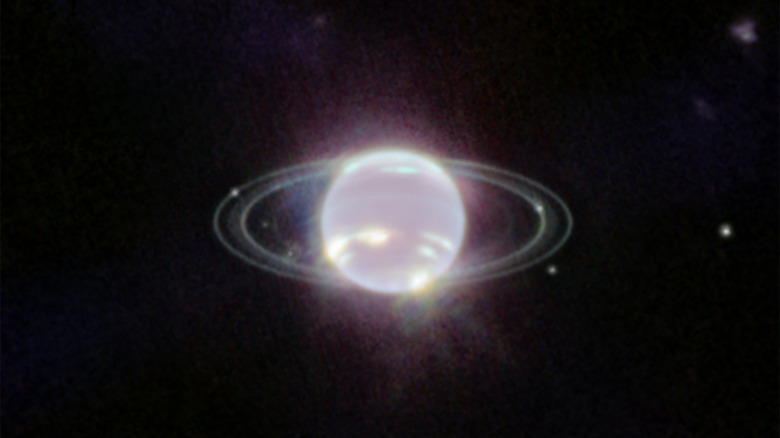 Saturn might be the famous ringed planet, but it's not the only planet in our solar system with rings. Neptune also has rings, which are faint and usually only barely visible, but they are captured bright and clear in a new image from the James Webb Space Telescope. This joins a previous Webb image which showed the almost invisible rings of Jupiter, demonstrating that Webb isn't only useful for studying very far-off galaxies, but can also be used to look at targets in our own solar system as well.

The image of Neptune was captured by Webb's Near-Infrared Camera or NIRCam instrument, which looks just beyond the visible light range in the 0.6- to 5-micron wavelength (via NASA). As this instrument looks in the infrared, Neptune doesn't appear in its signature blue color, which is caused by methane in its atmosphere. This methane absorbs infrared light and creates dark patches. But you can see the planet's methane ice clouds as lighter patches over the planet's surface because these clouds reflect sunlight and appear to shine brightly.

As one of the more distant planets in the solar system, located 30 times further from the sun than the Earth is, it's rare to get such a good look at Neptune. That makes this image an important one for researchers.

"It has been three decades since we last saw these faint, dusty rings, and this is the first time we've seen them in the infrared," said Heidi Hammel, Webb interdisciplinary scientist.

What this image shows of Neptune

As well as looking striking, this image shows some key features of Neptune. You can see several of the planet's moons, including by far the largest of the moons, Triton. Even though Neptune has 14 total known moons, this one moon makes up 99.5% of the mass orbiting the planet. It is an unusual sphere shape and, unusually, it rotates in the opposite direction to Neptune. Triton is the very bright dot above and to the left of Neptune in the image.

Closer to Neptune, you can also see some of the smaller moons including Galatea, Naiad, Thalassa, Larissa, Despina, and Proteus.

Another visible feature on the image is what NASA describes as a thin line of brightness around the planet's equator, which is thought to be related to the way Neptune's atmosphere moves. The planet has a thick atmosphere that is divided into upper and lower sections and is made primarily of hydrogen, helium, and methane. And this atmosphere is dynamic, with clouds moving and changing with the planet's weather of winds and storms. Around the equator, gases in the atmosphere warm and descend, glowing more brightly in the infrared due to their heat and creating the bright band.

A final feature that isn't quite visible in the image but is still intriguing is Neptune's north pole. Because of the way the planet orbits, it's hard to observe this pole, though there seems to be some brightness coming from it in the image, which NASA describes as intriguing. At the planet's southern pole, there is a vortex with clouds swirling around it.

Source: https://www.slashgear.com/1021256/neptunes-rings-captured-in-clearest-james-webb-image-yet/
We use cookies to ensure that we give you the best experience on our website. If you continue to use this site we will assume that you are happy with it. Ok