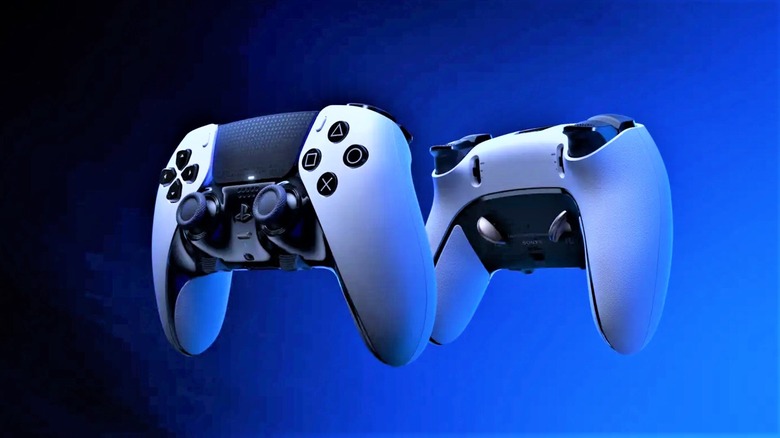 Sony finally unveiled its Xbox Elite controller contender, but does the latest, highly customizable DualSense Edge do enough to give Microsoft a run for its money? In terms of last-gen hardware, Sony's DualShock 4 fell a bit short of what we deemed as the best controller of all time. While the DS4 came with all the bells and whistles of a top-tier controller, its customizability was still nowhere near that of the Xbox Elite Controller Series 2. Debuting back in 2019, the Elite Controller Series 2 was marketed as the "world's most advanced controller."

It had both the hardware and software to back that claim up too, giving gamers a plethora of customization options in the process with some serious pro-gaming potential. When the PS5's DualSense arrived in 2020, however, Sony once again reinvented its tried-and-tested formula by introducing new features like haptic feedback and adaptive triggers. The thing is, it still lacked the level of customization offered by Microsoft's Elite series controllers ... until today, that is. Now that Sony is gearing up to release its DualSense Edge, will it finally stop playing second banana to the Xbox Elite Controller Series 2?

Sony's bringing the 'edge' back to its DualSense

At a time when content creation and competitive gaming are on the rise, the new DualSense Edge controller makes, well, a lot of sense. We once argued why the original PS5 DualSense is probably the best controller ever made, and it's about time Sony makes it even better. In a press release, Sony introduced the DualSense Edge as its "first-ever high-performance, ultra-customizable controller." Among its long list of new features are two sets of back buttons which come with two swappable cover styles, three types of interchangeable analog stick caps, and replaceable modules of the sticks themselves that are, unfortunately, sold separately.

Of course, users can remap or deactivate any of the controller's buttons, including the ability to fine-tune the sensitivity of its analog sticks and triggers. Any changes can be saved in multiple controller profiles, which can easily be switched using the dedicated Fn buttons sitting behind its triggers. Sony will also be bundling a braided Type-C cable that makes it "less likely to slip out" due to erratic motion, as well as a carrying case that doubles as a charger. Overall, this revamped DualSense certainly sounds like an upgraded version of the crazy expensive third-party PS5 controller. Although there's still no pricing info on the DualSense Edge just yet, let's hope it won't be as pricey once Sony reveals more "in the months ahead."

Source: https://www.slashgear.com/978080/ps5s-dualsense-edge-is-sonys-answer-to-the-xbox-elite-controller/
We use cookies to ensure that we give you the best experience on our website. If you continue to use this site we will assume that you are happy with it. Ok