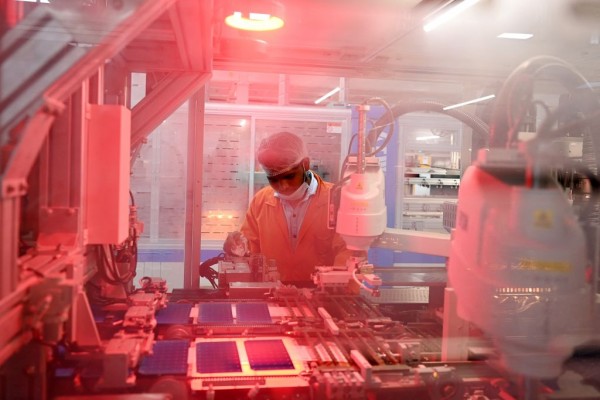 A study from North Carolina State University shows how "bioprinting" plant cells with a 3D printer can be a replicable technique for researching cellular function among different plant cells, as reported first by Interesting Engineering.

This aids us in understanding how plant cells interact with one another and their environment, which could lead to the development of better crops, according to the research recently published in Science Advances.

(Photo : ARUN SANKAR/AFP via Getty Images) In this photo taken on October 13, 2021, an employee checks an automated machine connecting solar cells at the Vikram Solar manufacturing plant in Oragadam, in the southern Indian state of Tamil Nadu.

The researchers bioprinted cells from the model plant Arabidopsis thaliana and soybeans to examine how long plant cells would survive after being bioprinted and how they would gain and modify their identity and function.

"There are also different sets of genes being expressed; some are cell-specific. We wanted to know what happens after you bioprint live cells and place them into an environment that you design: Are they alive and doing what they should be doing? "

The scientists employed "bioink," or living plant cells, in place of 3D printing ink or plastic. The mechanics of both procedures are the same, but there are a few key variations for plant cells, including the use of a UV filter to maintain a sterile environment and numerous print heads rather than a single one to print various bioinks simultaneously, according to Van den Broeck.

Nutrients, growth hormones, and the thickening agent agarose, which is derived from seaweed, were bioprinted onto living plant cells without cell walls (protoplasts).

According to the researchers, agarose works similarly to a mortar for the bricks in a building's wall by giving cells solidity and scaffolding.

Read also:  'Chameleon Robots:' These Robots Can Change Colors and Mimic Their Surroundings Through 3D Printing

The research discovered that more than half of the 3D bioprinted cells were divided into microscopic cell colonies known as microcalli after some time had elapsed.

According to the team, bioprinting offers a possibility for high throughput processing and control over the final architecture of the cells, which can take the form of layers or honeycomb patterns.

The researchers also used bioprinting to test individual cells to see if they could divide, develop, or regenerate. The findings showed that different nutrients and scaffolding were necessary for the root and shoot cells of Arabidopsis to survive.

The cellular composition of the bioprinted cells was also examined by the team. Arabidopsis root cells and embryonic soybean cells both exhibit high rates of proliferation and a lack of permanent identities. In simpler terms, these cells can turn into various cell types, similar to a human or animal stem cell.