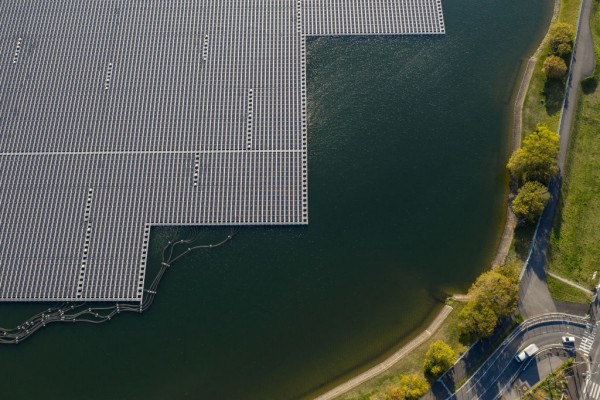 An extraordinary island covered in dozens of solar panels is currently energy on a lake in the Netherlands.

However, this is not your typical floating solar farm. This is because its panels perform a task that other farms are incapable of: they closely monitor and follow the Sun's movements to capture its rays.

This project, called Proteus, after the ancient Greek sea god, is one of the first to use floating solar panels with Sun-tracking equipment to maximize the amount of clean electricity it can generate, according to a report by BBC.

(Photo : Carl Court/Getty Images) ICHIHARA, JAPAN - APRIL 16: Vehicles pass along a road on the shoreline near Yamakura Dam floating solar plant, on April 16, 2019 in Ichihara, Japan. Activated in March 2018 and the largest power plant of its type in Japan, the solar plant was constructed on the surface of Yamakura Dam reservoir and covers over 44 acres of surface area with 50,904 solar modules generating approximately 16,170 megawatt hours (MWh) per year - enough electricity to power approximately 4,970 typical households.

This island consists of 180 mobile solar panels with a combined capacity of 73 kilowatts of peak (kWp). It is currently floating in the Oostvoornse Meer, a lake in the southwest of the Netherlands.

SolarisFloat, the Portuguese firm that developed Proteus, thinks this little installation may be scaled up to generate significant amounts of clean electricity without taking up large land areas.

The firm provides two different kinds of solutions. The first is the 180 dual-axis tracked modules PROTEVS+. It is identical to the aforementioned project and is 1,444 square meters in size with a 38-meter circle, as noted by Interesting Engineering.

The PROTEVS Single360, which operates on a single axis, is the second option. It features 360 PV modules with a fixed slope of 10 degrees. For 410 W panels, the Protevs Single360 has an installed capacity of 147 kWp.

The PROTEVS systems, according to Solaris Float, are simple to install and are detachable, modular, and scalable. The islands can even be combined to create a floating solar farm because of their detachability.

The Rise of Floating Solar Panels

Floating solar panels have been on the rise all throughout the world. BBC noted that between 2015 and 2020, floating solar capacity increased dramatically from 70 MWp to 1,300 MWp.

Over the following ten years, the market for the technology is anticipated to increase by 43% annually, reaching $24.5 billion by 2031.

One of the most recent developments in the rapid growth of solar-powered electricity in recent years is the development of floating solar technology. From 72GW in 2011 to 843GW in 2021, the capacity of solar PV systems has almost doubled globally in the last ten years.

The technology currently contributes 3.6% of the world's electricity generation, a significant rise from 0.03% in 2006. The cost of solar power systems has also dropped dramatically, making them the cheapest energy source on the global market.