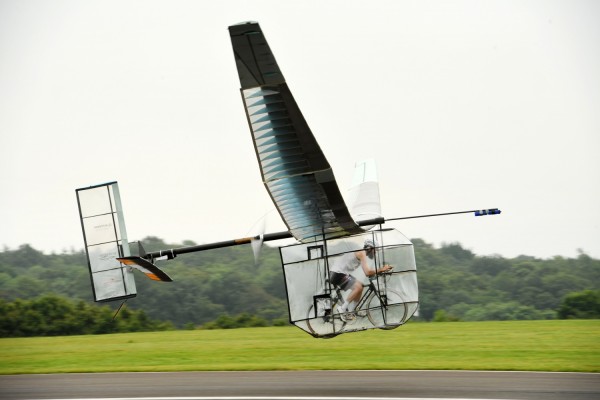 Is it a bird? Is it a plane? No, it's an aircraft that flies by pumping human muscles!

As reported first by Interesting Engineering, University of Southampton students have been collaborating on a unique project for years. They have been developing an aircraft that is solely powered by the muscle of a pilot, which is known as human-powered aircraft (HPA).

The aircraft used in the sport must have a low cruise speed and be made of lightweight materials because the human body can only exert its maximum power for a brief period.

As a result, they can only fly in low winds, making taking off and maintaining flight challenging but not impossible.

Teams are required to create their human-powered aircraft and fly them throughout the competition. No crash landings are permitted, and the aircraft must be a new design that is powered solely by the pilot's body weight, be heavier than air, fly for more than five seconds, and land in good shape.

The Southampton team mostly used XPS foam, carbon fiber, and balsa wood to construct their aircraft. They were somewhat delayed by the COVID-19 pandemic, but they eventually finished Lazarus and took their first flight in June 2021.

The Lazarus needs a crew to drive, take off, and land, and its wings flex upward in the air to improve lateral stability.

The students are so committed to the HPA project that they even founded an organization for it, the Southampton University Human Powered Aircraft Society (SUHPA), to ensure that work on it continues long once they have left the university.

Super Lazarus, SUHPA's newest project, has a wingspan of 78 feet (24 meters), but its weight has been reduced to 83 pounds (38 kilograms).

Despite not winning this time, the team nevertheless accomplished a significant milestone. The Super Lazarus set a record for itself while flying in 31 seconds.

Kit Buchannan, who is not a member of SUHPA but a pilot for another HPA in the competition, flew the aircraft.

SUHPA is eager to collaborate with persons with a variety of backgrounds who can aid in the design, construction, or even flight of the aircraft. If you are interested in joining the team, you can contact them here.

Related Article: The World's Largest Aircraft Mriya Will be Revamped After Suffering Damages from Russia-Ukraine War