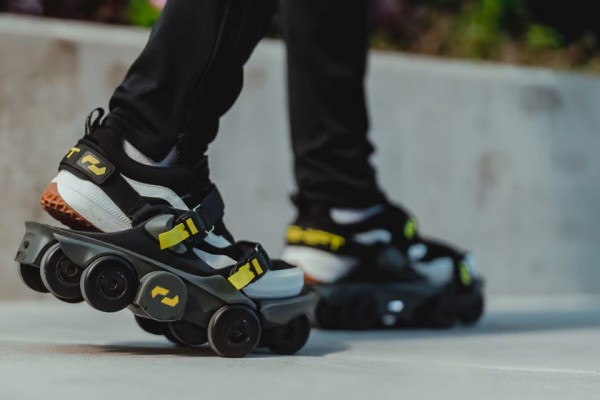 If the shoe fits, walk in it as fast as you can!

The Moonwalkers may appear like a simple pair of strap-on electric roller skates, but they are much more. According to its developers, their powered wheels will accelerate your walking speed by 250% if you wear them.

But most importantly, they are referred to as the "world's fastest shoes."

These shoes were created by Carnegie Mellon University spinoff company Shift Robotics, and it is the focus of a current Kickstarter campaign. New Atlas reported that they have quick-release magnetic buckles and adjustable straps that can be used to attach them to a variety of shoes.

Eight polyurethane wheels in each of the Moonwalker's 300W brushless motors spin up when the user walks, almost giving them the feeling of strolling on a "moving sidewalk" in an airport.

The user's strides are continuously tracked by sensors in both Moonwalkers using machine learning-based algorithms; the quicker or slower the user walks, the faster or slower the wheels move as well.

According to the developers, wearers may come to a complete stop from the highest speed of 7 mph (11 km/h) in less than one meter (3.3 ft). The Moonwalkers also adjust their wheel speed when going downhill so users won't skid out of control.

Each unit of the Moonwalkers features a hinge behind the toe area, allowing it to stretch like a shoe at the end of each stride. Additionally, the Shift and Lock modes can be changed with a few easy foot movements.

The Shift mode also allows the user to walk while the wheels freely rotate. However, they are locked in place in Lock mode. This implies that the user may stand still or even perform simple tasks like climbing stairs without worrying about their feet slipping out from the shoes.

Depending on variables including walking speed and terrain, each unit's lithium-ion battery is said to be capable of a range of around 6 miles (9.7 km) on a single 1.5-hour charge.

If the Kickstarter campaign proves to be a success, a pair of Moonwalkers will cost around $899, and the intended retail price is $1,399.

Shift Robotics hopes to raise $90,000 through the campaign to cover the expenditures of its first month of production. Within two hours of its inception, it has already raised over $24,000 after selling all 10 pairs made available for $799 within a short period, according to Pittsburg Inno's report.